Three female Muslim teenagers must decide how far they are willing to go to defend their beliefs when faced with the pressures of life.

Thirteen-year-old Sadia is Muslim and passionate about one thing: basketball. When her teacher announces tryouts for this year’s co-ed team, she jumps at the opportunity. Her talent speaks for itself. Her head scarf, on the other hand, is a problem. Surrounded by her classmates and a new friend, Syrian refugee Amira, Sadia learns about standing up for herself and fighting for what is right.

Written from Sadia’s point of view, the book examines how three female Muslim teenagers experience life. Sadia wants to maintain her Muslim identity and refuses to remove her head covering at a basketball tournament; Amira is a Syrian refugee, reeling from the trauma she experienced when she fled her home; and Nazreen is ready to eschew her Muslim heritage to fit in with the popular crowd at school.

Thanks to the publisher and Edelweiss for the eARC in exchange of an honest review.

Hijabi girl on the cover, MC is a basketball player, three Muslim girls fighting to hold on to their faith and identity. Gimme Gimme Gimme that book. Everything seemed so relatable that I had to request it right away.

The book is about Sadia, a Syrian emigrant in Canada who has to navigate freshman year of high school with new friends, rediscovering old ones and question if her belief and identity is more important than her passion for basketball.

Even with such a great plot premise, everything was wrong. If I were to read this book without the blurb, I’d totally picture Sadia’s class to be sixth grade. But that’s nothing close to the actual problem.

A big focus on the book is about Sadia being able to play in her Hijab. When facing problems in her regular hijab, Sadia’s best friend sews her a sports Hijab. It was a truly inspiring and heartwarming scene, to see how the team and the two best friends came together to let Sadia stay in the court without giving up her hijab. But, then she thinks how this could be inspiring to all Muslim players who can’t play because of their hijab.

This is where everything goes wrong. Sports hijab has existed since late 90’s, way before Nike came in the sports hijab business. FIBA has approved hijab, so has most basketball associations. Most other sports like Olympics, FIFA, ICC all allow hijab. But let’s try to see this as fiction because that’s what it is, and let’s pretend none of the movements in the real world has happened in the world the book is set in.

When put in comparison with the girls who’d had to fight for their right to wear hijab and play, Sadia’s fight wasn’t anything close to reality. It was too easy, a five minutes of stomping feet on the court and chanting “Let her play” was all they needed. Here’s Bilqis Abdul-Qaadir‘s story of fighting FIBA to lift hijab ban. When I realized the story was focused on this, I’d really hoped Nelson would go in depth on how these struggles actually look for us hijabis, but there wasn’t any research done at all.

Just like Sadia’s life as a hijabi teen was very stereotypically shown, her Syrian heritage was poorly depicted. There was no grounded mention of the diaspora, nothing to show her culture. Besides that, Sadia and Nazreen’s friendship revolving around Nazreen taking off hijab was a very ignorant take on the author’s part. There were more ignorant and stereotypes throughout the book:

Overall, as a hijabi myself, reading Sadia’s story wasn’t like seeing someone who’s like me, rather someone who my non-hijabi acquaintances picture me to be. 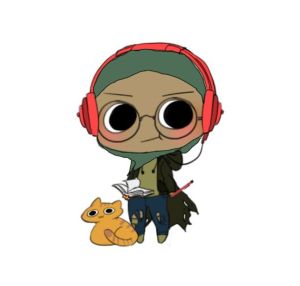 Tas is an avid reader and YA writer, expert daydreamer and gifted napper. They’re a proud not-yet-zombified human.